A Journey into the world of Beekeeping
Leave a comment

Posted by wingless1 on November 25, 2012 in Beekeeping, Hive inspection

My first solo hive inspection today. Nice, warm day (about 23˚C) and no clouds, and the girls were buzzing merrily. My other girls had been making some noise, so I think I’ll find some cackleberries there – but I digress. 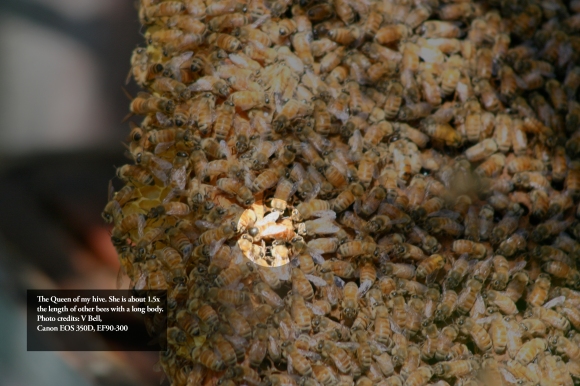 My queen, on a frame packed with bees. She is about 1.5x the length of the workers. The drones are fatter than workers, with bulgy eyes.

I found the queen, and there seems to be a pretty good pattern of brood, with few gaps. On the other hand, I really don’t know what I am looking at yet. 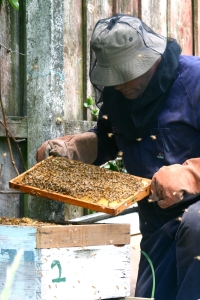 Carefully lifting out the frames, examining the brood pattern, finding the queen.

The queen was in the middle frame, just visible in the photo, taken by my darling Wife, with a large zoom lens. I only have one hood and even that was just a mosquito net. No stings today, but my gloves copped about four, mainly because they are so fat and brutal.

I can’t see much honey and they have not yet begun to draw out the top box. I guess I can wait a few weeks before putting on a super (that is the top frames that they will put the honey in). I found out recently that one of my students is works for a beekeeper – actually for the largest apiary in the South Island. He may come in useful some day for a bit of advice.

I found out recently about the pheromone which bees use as there alarm signal, enticing them to sting anything which moves, called isoamylacetate, or 3 methyl butyl ethanoate. I can make it by the beaker full in about 30 seconds in the lab. I probably shouldn’t though.