A Journey into the world of Beekeeping
2 Comments

My beekeeping prowess has taken a wee hit to the ego lately, and I sometimes wonder what on earth I am doing. I have had a number of discouragements, but at least my hives are still alive, despite a massive amount of deaths.

Firstly, I attempted to make a new hive by splitting. I loaded some frames with brood and eggs and grubs of all ages, along with some honey and a bunch of nurse bees, into my new purple nuc box (I found the queen, to make sure she was left out. I sealed the entrance with a piece of mesh to keep them in for a day – the idea being to give them a bit of time to realise that this was their new home, and there were no queens in it. They were supposed to then make a new queen, set up a little home, and live happily ever after. Unfortunately, we were then (while I was at work) hit by a 32˚C day (90˚F). My poor bees were busy overheating and the foragers I had collected were desperate to get out – they did not fan the hive, but instead blocked the entrance. Most of the bees and all of the brood died. I didn’t realise that was the case, as there was busy traffic too and from after I opened it – fully robbed out. I was very quiet for a few days.

I have checked to see the progress of the established hives, and check their health. There are plenty of bees, few mite signs, but little honey. I even removed a super (bone dry) from apple hive. Very disappointing. I may only get 20-30 Kg total this harvest, if any. I am guessing that the dry weather has prevented much of the flowering around the area, and with 8 hives over the fence there is a bit of competition. I may relocate one of my hives into town next year.

My last disaster was when I left my shed door open by mistake. I had a drip tray with honey in it under the extractor, and some open wet, extracted boxes of honey. The bees found it. My shed was filled with thousands of bees, going in through the door, and then trying to leave via the window. The windows each had a reverse waterfall of bees slowly climbing up to the top, then dropping down to the bottom again. By nightfall there were clusters of perhaps two or three thousand bees around the shed. Probably lots more. I had to lift the affected items out of the shed, amid the clouds of bees, and just let them clean it up. I taped tarpaulins over the windows, so that they left the windows and tried the big doors instead. My shed is nearly empty now, with only a few hundred starving bees and a graveyard of corpses left behind. I hope they belonged mostly to the neighbours hives. I need to vacuum the whole shed now.

This Sunday I will be helping a friend extract. He may have over 100Kg this season. We will need to work in the evening, to prevent the little winged scavengers from dying en-mass again. My extracting will be in a week or two also. After that I will put strips in to kill Varroa. I hope I will be getting the strips in early enough for them to be strong and disease free before winter hits.

As for new hives – I will try again next spring, armed with a bit more knowledge and a more sober appraisal of my skills. Helper D was disappointed he couldn’t quite lift a box up onto the hive – I have given him my word that when he is strong enough to lift a 3/4 super filled with honey, then he can have a hive of his own. Not this season my little man, not this season. I am very proud of his development, both in strength/stature and his care of animals. He also wants a dog. I would rather he have a hive – less costly.

Helper D is actually pretty useful these days, although he wasn’t quite able to lift a box on to the top of that one. 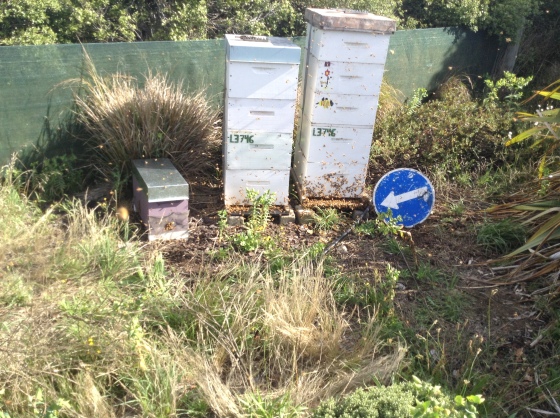 Purple Nuc, now dead, next to Apple and Olive hives. I have a nice sign to help guide them in. Apple hive is now down to 1 super, while the top super on Olive will probably only be half usable.